What Type-Writer Are You?

“Keys” to saving energy and unlocking your writing skills
may lie in the old fashioned, low-tech past. 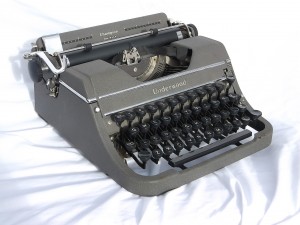 Does global warming get you steamed when you’re trying to write the great American novel? Does the rising cost of energy tire you out? There is a way you can take back some control and improve your writing skills at the same time. This technique for putting words on the page is the most energy efficient and won’t require you to learn new software. In fact, it’s a throwback to the beginning of the last century and earlier. I’m talking about writing on the trusty old, manual typewriter. That’s right, the one you or your parents used in high school. The one you probably still have gathering dust in your attic or garage.

Nothing evokes the romance of writing more than the squat, familiar Remington, Royal, or Smith Corona. Their very names conjure up the era of Faulkner, Fitzgerald, and Flannery O’Connor. Michener was fond of his Swiss-made Hermes, with its smooth action and large, easy-to-see keys. Steinbeck took his dog and his portable Underwood on the road and gave us “Travels with Charley.” Hemingway lost his portable on an overnight train in Europe, an incident that spawned a whole sub-genre of fiction. What did they have in common? They did it all on manual typewriters, and there hasn’t been a collection of such illustrious writers since.

Computers and word processing may have taken over our day-to-day work, but the typewriter is still the symbol of the writing profession. No one gets the same sense of history or the power of the written word from gazing at a computer monitor. It just isn’t the same.

Over the years, I’ve picked up half-a-dozen different manual typewriters from garage sales and thrift stores, and they all work like champs. I often use a typewriter to compose the first draft of whatever I’m writing, not the computer or even an electric typewriter. Editing on the computer can’t be beat, but sometimes I don’t want to stop the creative flow to edit in the earliest stages of my work. On the other hand, if I’m not putting down words as fast as I can, the difficulties of editing on the manual typewriter force me to concentrate on what I’m going to say before I write it down, and that can’t be bad. It also keeps me from getting distracted by editing before I’m through my first draft. I just keep moving forward, rather than stopping to second-guess what I’ve already written.

I love the IBM Correcting Selectric, but I’m not always comfortable listening its persistent electric hum. It’s like the IBM is drumming its electronic fingers, waiting for me to put my next thoughts down on the page.

When I am finally ready to edit, I retype my pages onto the computer. The simple act of doing this gives me a close second read and lets me evaluate what I’ve written as I input. This process becomes a mental combination of editing and original writing. Because I’m already familiar with the draft, it’s easier to see what’s working and what isn’t, and I often get better ideas and improve a story or an article as I go. By the time I get everything transferred to the computer, I have a smoother, more polished “first” draft than if I had edited while I composed on either the typewriter or the computer.

And yes, the only energy the typewriter uses is the power of your fingers tapping or pounding, if you prefer, on the keys. The crisp snap of a metal key hitting paper is a thoroughly satisfying sound you just can’t get from a plastic keyboard and a laser printer. The very act of pressing on a manual typewriter key requires you to commit to what you’re going to say. Expressing oneself with the written word has never been the same since typewriters were replaced.

If you’re worried about using too much paper, consider that now-a-days it’s a renewable resource. Most typewriter paper comes from farms, where trees are planted in rows and harvested on a regular schedule.

To date, I have been able to buy typewriter ribbons at my local office supply store, or on-line if necessary. Ribbons are still manufactured because there are rural areas and whole countries around the globe where electricity is unreliable and computers are too expensive for the average citizen. Also because there are still a few Luddites out there who choose to use a typewriter.

There are other advantages to using a manual typewriter. No, you can’t surf the web from your Remington, but all that time you spend on-line isn’t helping you get your manuscript pages written, is it? You can’t play solitaire, free cell or any other video game on the typewriter, so think of the hours of productivity you could reclaim on that basis alone.

Finally, you’ve never heard of a manual typewriter crashing or going off-line, have you? In fact, you can drop a Smith Corona off your kitchen table and it’s more likely to dent the linoleum than damage the typewriter’s sturdy metal sides. What’s more, manual typewriter technology can’t go out of date – it’s already out of date – and if it ever stops working, which is unlikely, there are no exotic, toxic metals to dispose of, like there are in your computer. You can recycle the old beast for money or toss it into an ordinary landfill where it will blissfully rust and return itself to the earth, unlike the plastic computer. Or you can stick flowers and photographs on it and use it as a decorative paperweight.

So, the next time you drop into your local coffee shop to work on the great American novel, dust off that old portable Remington and take it with you instead of your laptop. You won’t have to fight the computer users for an electrical outlet, and your writing time won’t be limited by your battery life.

What’s more, all the other would-be writers-in-residence will envy you. After all, you’re following in the footsteps of Hemingway and Steinbeck, not to mention Al Gore.